The origins of Oakley Park lie back in the 15th century, when the New Park in Hoxne was emparked by the bishop of Norwich c.1472 - 1492. A new Bishop's Palace (later known as Hoxne Hall) was probably built at the same period. An estate map of 1619 (Suffolk Record Office ref. HD 40:422) shows Hoxne Hall to be roughly on the same site as the later Oakley Park mansion. There was a large formal garden of geometric design on the north side of the house and it was fronted on the east by a large and imposing gatehouse. This seems to have been similar to the gatehouse of Buckden Palace in Cambridgeshire, built by the bishops of Lincoln at the same period.

Over the next two centuries the Hall must have undergone substantial change. A print published in 1819 of Hoxne Hall, the property of Henry Maynard, shows a house very different from the Tudor hall, but on the same site and still set in parkland.

By the time of the print's publication the estate had been purchased in 1818 by Matthias Kerrison, who never himself lived there. On his death in 1827 it was inherited by his son General Sir Edward Kerrison, who set about a major remodelling and enlargement of the house (completed c.1830) and laid out new pleasure grounds and gardens around it. Below is a view of the new house, renamed Oakley Park. The stable block, which is now the only part remaining, is visible on the lefthand side. The mansion house was itself demolished c.1922-23.

On 8 June and 30 August 2017 members of the Hoxne Heritage Group visited The Gardens and Park House in Hoxne to see what traces remain there of the layout of the gardens and grounds of Oakley Park mansion. Below is a sketch map largely based on the 1927 25 inch Ordnance Survey map. It shows the site of the Oakley Park mansion house, adjacent to the stable block, as it appears on the 1843 Tithe Map. The attractive setting of the house between the two rivers is clear. The green shaded areas are woodland, and the purple lines are the paths and carriage ways laid out after 1827. The main carriageway entrance south of the mansion was then at the junction of the Eye Road/Low Street/and Abbey Hill.

In June we visited the walled kitchen garden. The first map evidence for this is on the 1843 Tithe Map. At auction in 1938 it was described as 3 acres in extent. The redbrick walls are still complete, except for a gate at the north western corner (seen in the background of this photograph) which is probably of later date. Brick edgings still delineate the old pathway looking west towards this gate, between the glasshouses and the pond.

The pond or reservoir which appears on 25 inch Ordnance Survey maps still remains, although overgrown, with a cement surround and the addition of a small fountain. When the kitchen gardens were offered for sale in 1923 the sales particulars stated 'There is a capital Water Supply by means of an Engine to a large sunk Reservoir, the water being pumped from the river through pipes.' The engine house was located somewhere in the grounds of Kingswood, and the pipes crossed these grounds and part of the Park from the river. What now appears as an ornamental pond was formerly an essential water supply for a large kitchen garden that supplied the big house, and after the demolition of Oakley Park was used for market gardening. 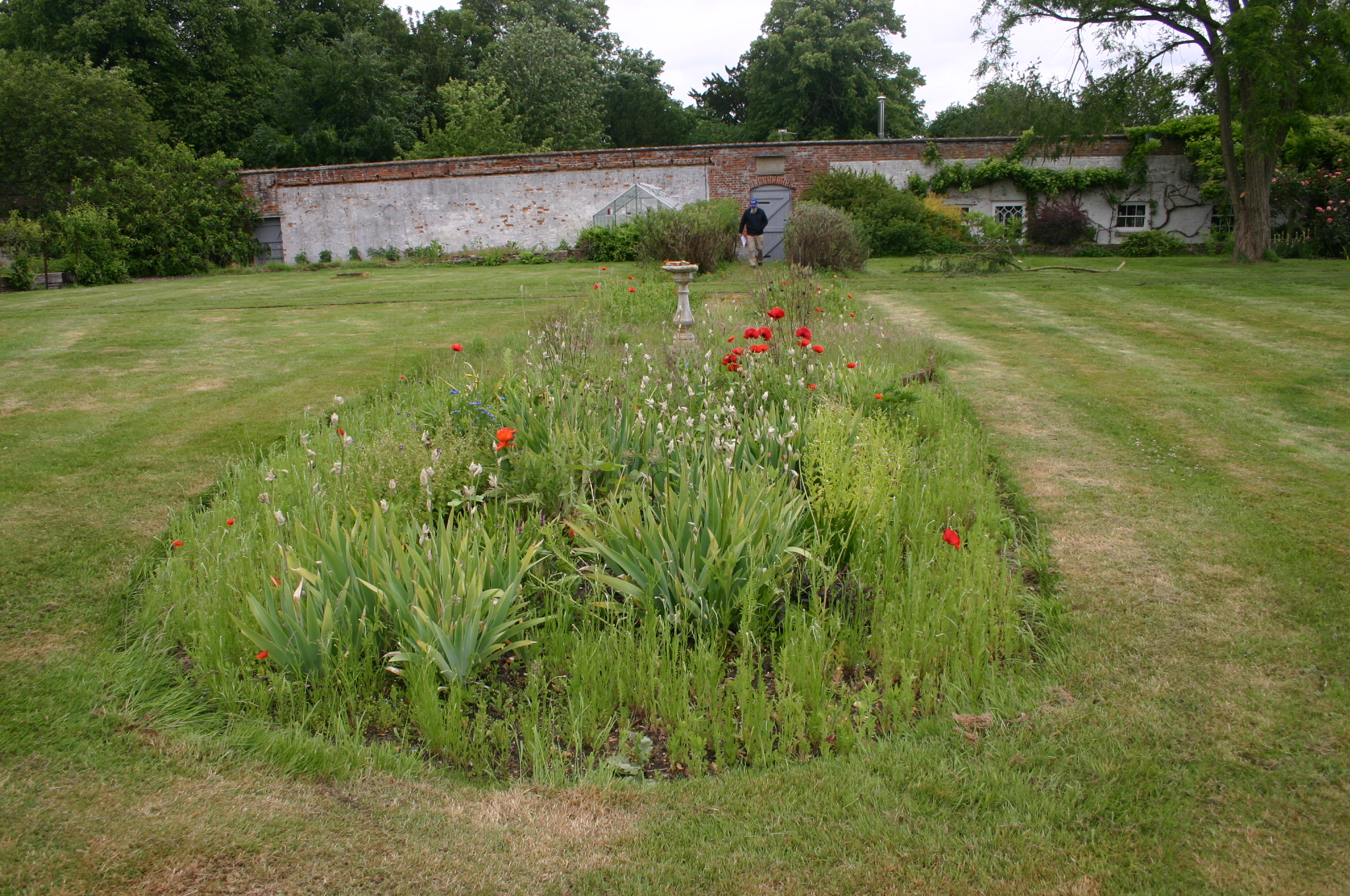 Two large leanto glasshouses once stood against the north wall, with a gate between them. The whitewashing on the rear walls of the glasshouses still shows their extent, and much of the low front brick walls of the glasshouses still remains. Above the gateway a stone inscription records the building of the walls by Richard and Thomas Murdock in 1829. Unfortunately, despite slates inserted into the brickwork above to protect the inscription, the first word or words are lost 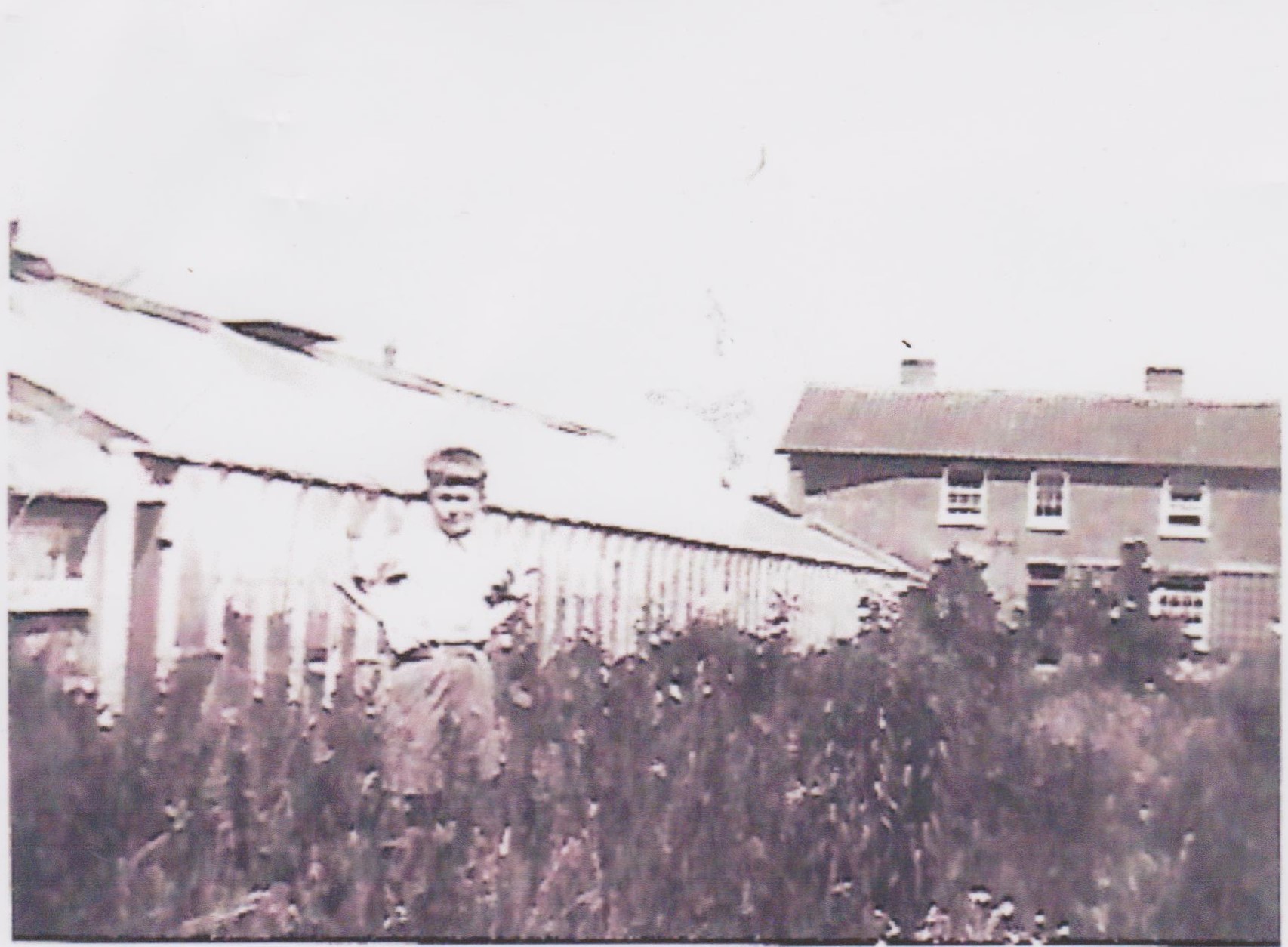 Greenhouse and gardener's cottage, with a member of the Bertie family - Mr P Bertie was a market gardener there 1943-78.

A cottage has now been built outside the walled garden onto the wall behind the easternmost glasshouse, with windows onto the kitchen garden. It does not appear on the Tithe map but the building does appear on later OS maps. It is unlikely therefore to have been the original gardener's cottage. In 1843 there was a small square building in the northeast corner of the garden (shown in black on the sketch map within the outline of the building existing in 1927) and this must be the nucleus of the later gardener's cottage. By 1923 this was described as a small residence with 3 bedrooms. [Since the 1990's it has been much enlarged.] The cottage and other buildings built onto the outside of the northern wall were described in 1923 as 'a Brick and Tile Bothy, Potting Shed, Toolhouse and Offices, Implement Shed and Store and other useful Buildings'. We could find no trace of any heating system for the glasshouses; the buildings against the outside of the north wall mask most of its length. However there is a channel in the outer wall to the west of the buildings which may have held a flue pipe. North of the walled garden, in the days of the Oakley Park mansion, there were further ranges of glasshouses including a palm house (which was the largest glasshouse immediately to the north of the wall). These have now all been demolished. However a range of modern buildings exists, probably built on the foundation of the northernmost glasshouses, as the lowest 4 or 5 brick courses are built of smaller and older bricks. West of these, and close to the western gate of the walled garden, there is a summer house or gazebo, known as the Birdhouse. A carved stone bird, now fastened to the inner wall of the kitchen garden where a glasshouse stood, was once on top of this summerhouse. 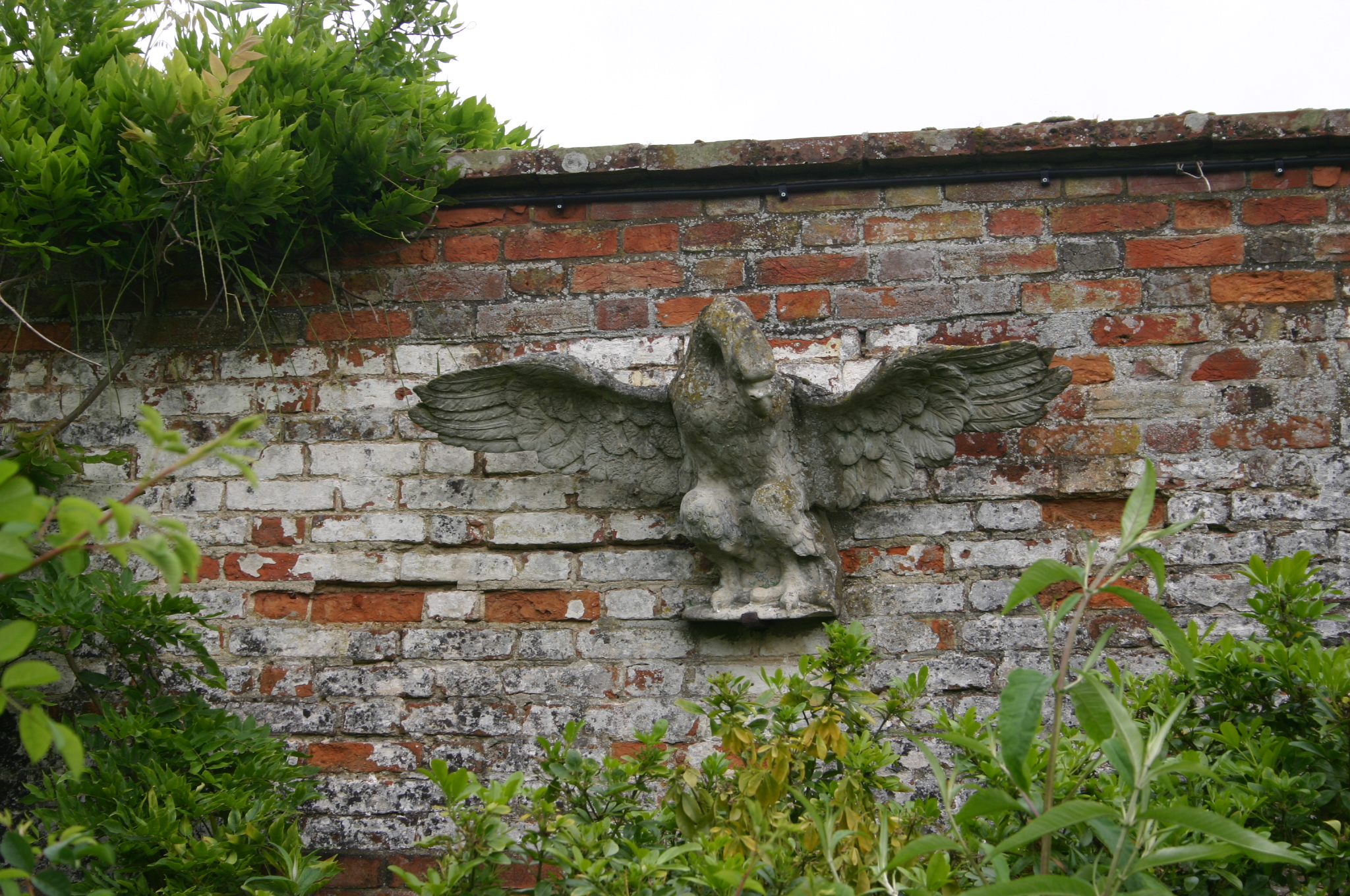 Fortunately a postcard of 1917 records the summerhouse complete with bird, and the approach to it from the west by a wide gravelled path.

with a fireplace within.

But the flanking walls with their unusual brick shapes are now derelict. 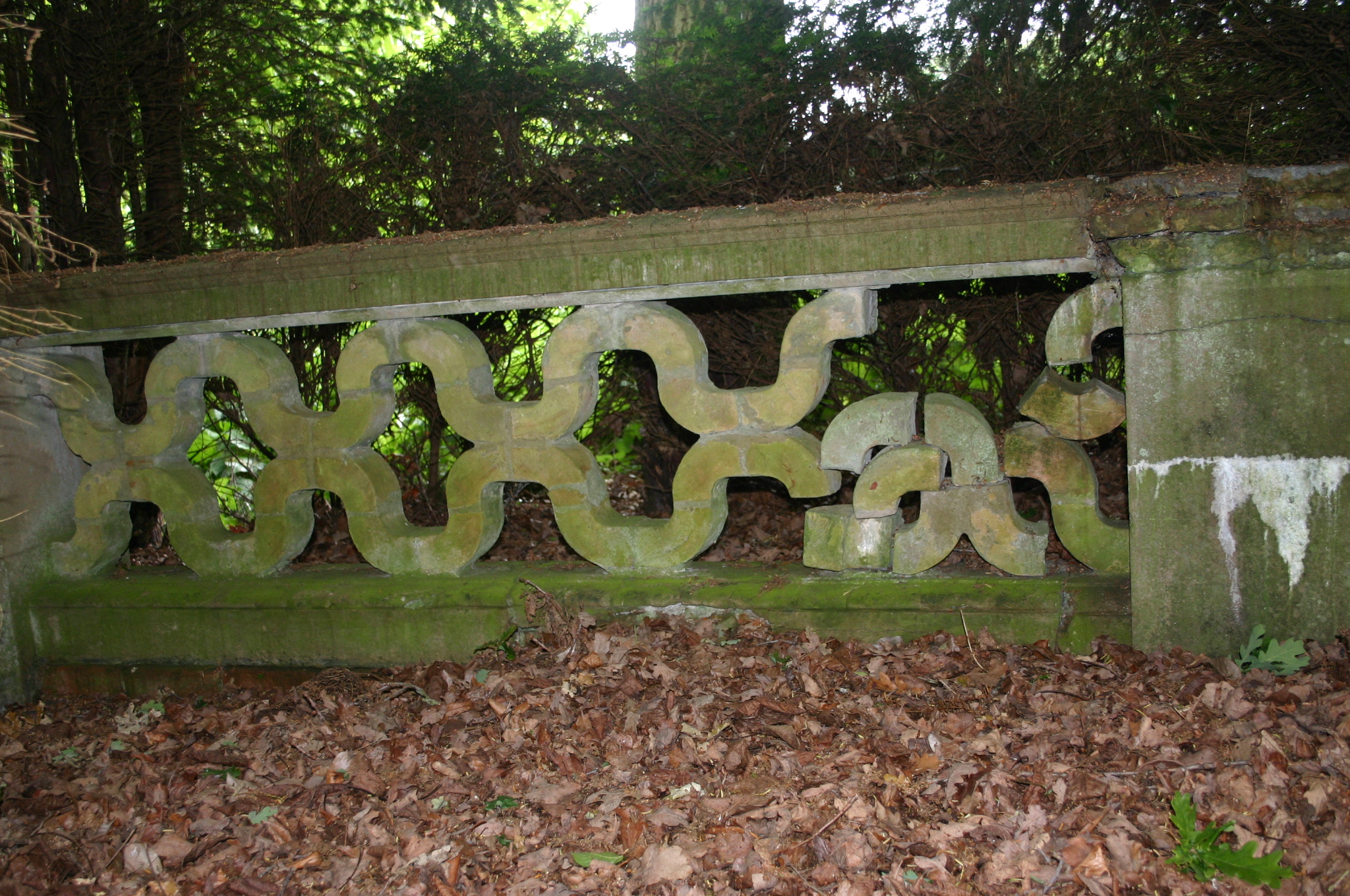 In August we visited the grounds of Park House to see what was still visible there. In the 1990's the historian Tom Williamson visited the site, prior to the publication of his book Suffolk's Gardens and Parks, (Windgather Press 2000), and confirmed from their size that many of the mature trees were probably planted in the 1820's. He also ascribed a similar date to box hedging along the path on the far side of the White Bridge. The remnant of a monument to all General Kerrison's horses is now in the garden of Abbey View. But within the grounds of Park House is the burial place of and memorial to Harlequin one of the horses which he rode during the Waterloo campaign. (Another horse Gift was killed under him in battle.) 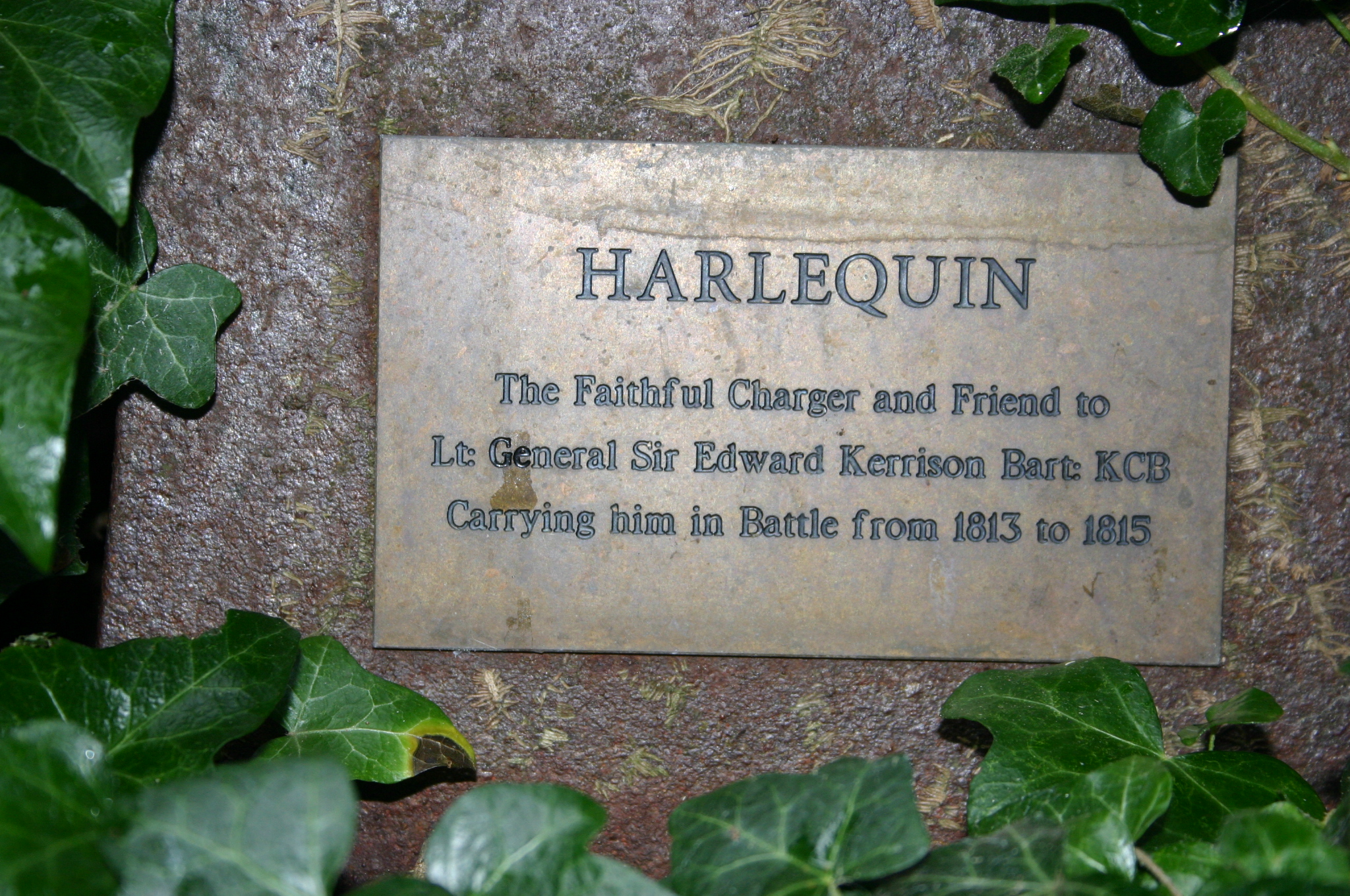 To the rear of the modern Park House, which is situated at the western edge of the pleasure grounds, Kerrison had 9 cannon displayed beside the path in an area known as the Waterloo Terrace. From there a path curved through plantings of box or yew to the intersection with the path to the Birdhouse.

This path went up a flight of steps flanked now by two columns, which may have originally come from the main entrance to Oakley Park.

The other path continued north downhill between flanking urns, directly to the Ladies South Drawing Room at the south west corner of the mansion.

Although not many formal features of the pleasure grounds are still extant, enough survive for one to imagine the broad walks, and the elegant ladies who strolled from the house along gravelled paths for exercise, visiting the palm house or the flowers in the kitchen garden, or taking tea in the summer house.