The presence of a watermill in Hoxne dates back to the Domesday Survey which states 'in Hoxana' there were two mills. However, it is unclear if these stood on the present site. The present Hoxne Mill was built in 1846 as a textile mill by Sir Edward Kerrison and replaced an earlier mill erected in 1749. A stone in the garden of the mill house, inscribed TP/1749, is assumed to confirm the date of the pre-existing structure. The 1749 structure had itself replaced an earlier building on the same site. The brickwork on the west corner of the present mill relates to the erection of the building in 1846. 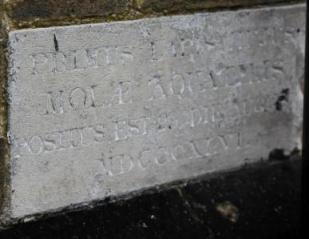 The three-storey watermill was built of brick up to the first storey and timbered weatherboard under a gabled slate roof. The lucam has pleasing curved support brackets. Although there were originally four pairs of stones, only two pairs remained by 1968, along with all dressing machinery, albeit in need of restoration.

One of the millstones 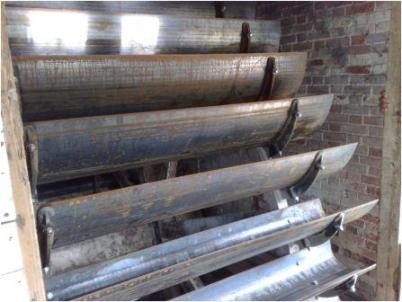 The mill was originally operated using water power but in 1897 auction details of the mill outlined in Dame Mary Kerrison's Trust Estate indicated a boiler house and engine room were included. This is a distinctive red-brick extension with a steam engine and tall brick chimney stack. The same auction notes included mention of "a half-sack Tattersall Midget roller plant, apparently a constant source of trouble" which is still in situ today. Deeds from that time indicate that the operation was driven by steam, wind and water. In the 1930-40's period Oliver Charlton, the mill owner, refurbished some of the old applewood cogs and teeth to enable the waterwheel to drive an electrical generator to provide power to the house and buildings.

An ongoing restoration project overseen by the current owner, Mr R. Wheeler, and carried out by local engineer Mr Keith Hawes of Athelington has brought a large number of the mechanical elements back into service, including re-dressing of the two remaining stones. In 2014 it was possible to drive a pair of stones for display, and actually produce flour for baking.

The function of the mill has changed over the years. In 1749 and 1784 records show that corn-milling took place. John Roper, miller and flour merchant, owned the watermill between 1816 and 1836. However in 1840 Henry Warne had closed his Diss factory which manufactured drabbets, huckabacks and sheeting and leased the mill from Sir Edward Kerrison for £125 p.a.to convert for textile manufacturing. By 1844 Thomas Coleby reverted the mill's function to corn-milling as Warne moved his operation downstream to Syleham Mill.

In 1855 the Lease stated that 'it shall be lawful for the said Sir Edward Kerrison, his heirs .......to use and exercise the full and absolute power and authority and control over the river or stream and supply of water to said watermill by lowering, raising or widening the float which regulates such supply at his or their discretion. 'Why the lessor stipulated such an unreasonable imposition, which could clearly jeopardise the smooth running of the mill, is difficult to understand. John Chase continued his milling operation from 1855 until his death in 1892 which suggests this clause was rarely, if ever, actioned.

Corn-milling remained the core operation of Hoxne Mill, under several owners, until 1937 when milling ceased and the wheel was used to generate electricity, as previously mentioned. In 1965 the mill was used as a factory until it was sold to the current owners in 1968.

The history of Hoxne Watermill is slightly confused as, between 1826 and 1923 a postmill existed just 200yds away, on the hill above the Mill. It is unclear from the records whether some of the millers during that period were both wind and/or water-millers. Some interesting graffiti on wood panels inside the mill is clearly decipherable and adds information about its heritage.

For further information about Hoxne Watermill please refer to:- Norfolk Mills Web site
and the publication 'The River Waveney - its navigation and watermills' by Douglas Pluck. ISBN O 948903 13 9